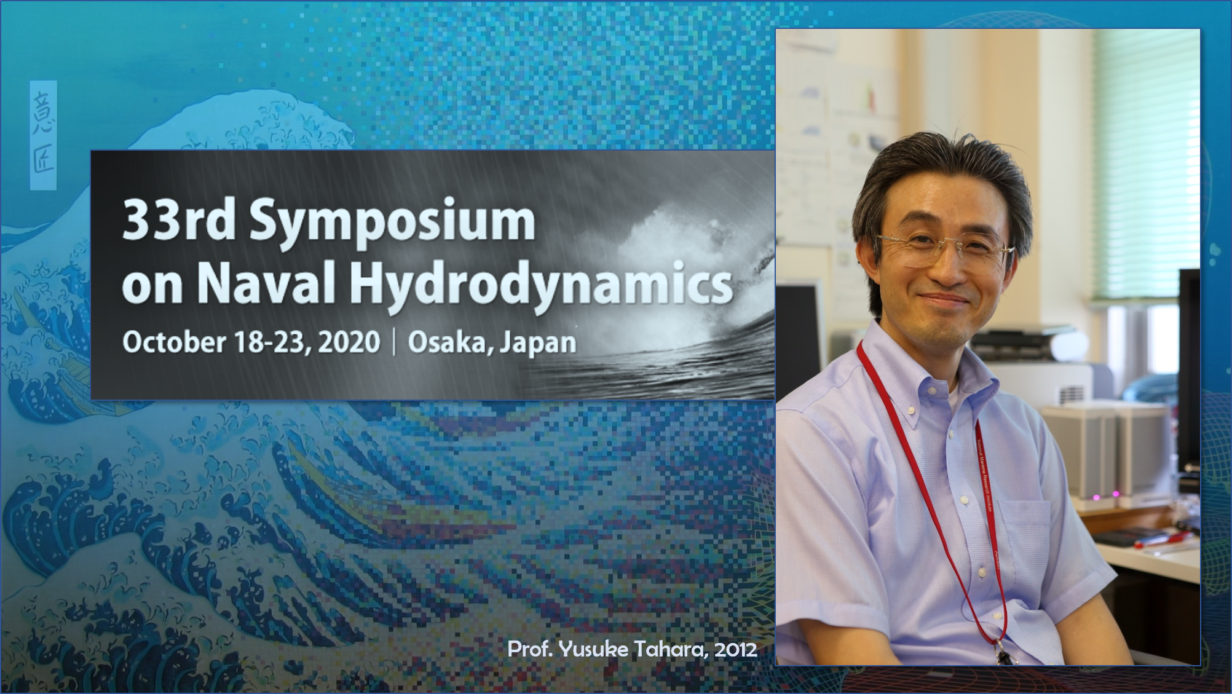 The 33rd Symposium on Naval Hydrodynamics closed its sessions on Friday, October 23. Due to the Covid-19 pandemic, the Symposium was not held in person in Osaka as originally planned but, for the first time, was run online reaching an audience of nearly 600 participants. This edition of the Symposium was dedicated to the memory of Prof. Yusuke Tahara, who sadly passed away on January 2019. On Tuesday, October 20, INM’s Matteo Diez gave an invited lecture on Simulation-Based Design Optimization in Naval Hydrodynamics, to commemorate Prof. Tahara and his research on optimization in ship hydrodynamics. Professor Frederick Stern introduced the lecture and also payed tribute to Prof. Tahara.

Prof. Yusuke Tahara was a senior research engineer at the National Maritime Research Institute (NMRI) in Japan and an associate professor at Osaka Prefecture University. He was a leading international researcher in the development of CFD codes, including potential and viscous flow solvers, grid generation, overset grid assembler and optimization. From 1995 to 2000, he led a team who designed the appendages of two Nippon Challenge America’s Cup boats, namely JPN44 and JPN52. He was an esteemed member of the Resistance Committee in 25th and 26th ITTC. His contribution to the field of naval architecture and ocean engineering was nationally and internationally awarded, including SNAME ABS Captain Linnard Prize in 2010 and Japan Society of Naval Architects and Ocean Engineers Paper Award in 2012.

His optimization research was outstanding in both methodological innovation and dedication to complex problems. The achievement of Simulation-Based Design by research, development, demonstration and dissemination was his life work. He participated in many Japanese and international collaborations under the support of the US Office of Naval Research, including Osaka Prefecture University and NMRI, the University of Iowa and the Italian Institute of Marine Engineering (formerly INSEAN). He greatly contributed to Simulation-Based Design optimization in ship hydrodynamics, with outstanding research on deterministic and stochastic shape optimization for ships in calm water and waves, multi-objective optimization, and genetic programming for naval applications.